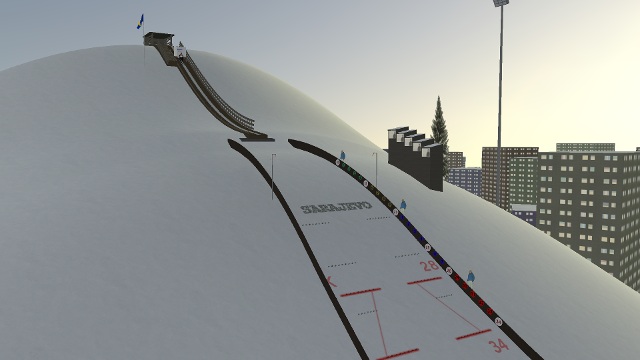 Sarajevo is situated in the center of Bosnia and Herzegovina. It covers an area of ​​142 km². The Miljacka River flows through them. There is a picturesque spring of the Bosnia River (Vrelo Bosne) near the Ilija district. The city is situated at an altitude of 500 m above sea level, in a valley between the five mountains of the Dinaric Alps: Bjelašnica (2067 m), Igman (1502 m), Jahorina (1913 m), Trebević (1627 m), Treskavica (2088 m). A large part of the city is located on steep slopes, which affects the buildings and street layout. There are ski resorts in the surrounding mountains (Bjelašnica, Igman, Jahorina).

Version #14 was uploaded by Kaliak uploaded 12 months ago | Download

wind parameter has been reduced

added a door under inrun and fixed some other details

stajnia is finished custom bands add and many others

stajnia is finished custom bands add and many others